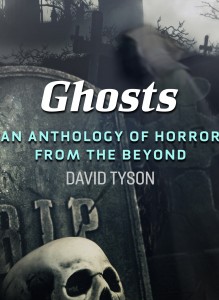 The long awaited anthology has finally been released.

Pick up your copy at Amazon here: Ghosts

Here is the blurb:

Thirteen authors from around the world bring you fourteen dark and disturbing ghost stories. With over 64,000 words that will chill your bone and keep you up all night, this anthology brings horror to a new level.
The Seventh Step by Judi Calhoun- A boy starts seeing eyes from the seventh step of his house which leads to horror unimaginable to him.

The Hat Man by Earl Bartel- A ghostly entity called the Hat Man must perform his duty again, but who is the Hat Man?

Chinese Buttons by Aaron Smith- “Furniture is the product of the thoughts of evil men” A man’s grandmother dies and the world will never be the same again.

Already There by Jeffrey Todd- A woman still mourns the death of her husband and child but have they really left?

The Inheritance by Kay Glass- A death of a baby in 1804 and a childless couple inherits a house in 2014. The darkness of what happens will leave you speechless.

House of the Goat Monster By Jim Goforth- Kathryn’s car broke down as she was lost. A ghostly child leads her to a house where one of the darkest stories in the anthology begin. Be warned this is not for the faint of heart.

Incorporeal Beings by Jonathan Nichols- Young adults go visit the haunted Denwood Manor where the spirits take a keen interest in them.

Drains in the floor by M.J. Pack- A ghost hunter at a campus tells a young student a horrific tale with horrific implications.

The Moat by W. Whitethorn- A cottage across the moat harbors a horrific secret and something does not want people to cross the moat.

Cherry Creek by Arthur Doweyko- Minnie lives in a town in Nevada in the year 1881. A series of events occur which leads to a ghostly realization.

The Broadcast Circle by Aline Boucher Kaplan- A woman driving home on a back road realizes her gift and a mystery ensues with a spiritual encounter.

Rapid Departure by Christopher Davis- Dean departs on a late flight and a man recounts a gruesome tale.

The Hitchhiker by David Tyson- John drives through the small town of Goldfield, NV and picks up a strange young girl.